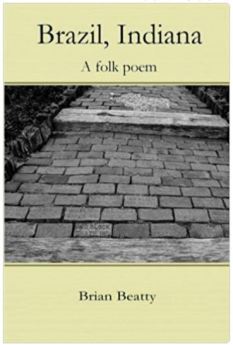 When I dug into Brian Beatty’s new poetry book, Brazil, Indiana, I was in the middle of season 2 of Twin Peaks (I liked season 1 better), so it’s probably no surprise that I spotted some of the same small town surrealism in Beatty’s book-length poem as is found in Peaks. There’s a man who trains moths, a man who half buried an old truck to spend days sitting in it, a town giant and of course a crazy cat lady.

These are some of the characters that populated the Midwest Beatty grew up in, and he’s populated his book with their stories, as well as, presumably, his own stories, in about 100 short 12-line untitled poems. Each poem is a vignette, some just a little more than anecdotes while others read like psychological profiles of people and locations.

I should note before I go further that I’m not an unbiased reader. I knew Beatty from our MFA years in Bowling Green University, and I have a short blurb on the back of his book. I’ve been reading these poems for years as Brian and I emailed our work to each other. In that time I’ve developed a deep admiration for his insight, talent and discipline to the craft.

About that craft–Beatty’s images strike the critical balance of being both familiar (especially if you’ve lived in a small town) and new. There’s the surreal quality I mentioned earlier, though not the surrealism of Breton, but more the surrealism of Simic, where the real world provides enough weirdness that the author doesn’t have to invent it. There’s the examples I mentioned in the beginning of this post, and many others, such as the kid with Tourette’s who slept under the counter at a burger joint, a beauty queen who wielded butcher knives, and a mayor who kept old circus animals. These people and their stories are used as doorways into a shielded world, one where the gears that kept an old town going are slowly disintegrating, and now the inner workings are starting to show through.

And then there’s the insights that will be familiar to every person who’s been around a farming community:

Every barn at some point becomes

nothing more than a metaphor with a roof

and a door straining against

down to repair the truck tire flat in front

of the only world he’s ever known.

As noted earlier, the poems, are all composed of twelve lines, though the line length and number of stanzas varies throughout. A frequent strategy of his is to work the poem like a Jenga puzzle, stacking images together and then pulling out a key piece at the end to undermine or change it. Just as an image or situation is fresh in your mind, he pulls out a piece to dismantle your first impression. The technique has a way of keeping you alert to shifts and changes, like the weather is constantly on the move, which in his Midwest of memory, it probably was.

While each poem is meant to be read as a part of the book-length work, each stands on its own, and many have appeared individually in journals, though it does benefit from being read in order. The poems build on each other, especially as a few of the characters, notably the main speaker and his family, recur throughout the work. The settings and subjects of Brazil, Indiana will appeal to readers from the Midwest or small towns anywhere, while the technique and quality will appeal to any reader who appreciates surprise, manipulation and lyric story telling.